I just finished a data visualization project about refugee resettlements in Wisconsin from 2002-2016. 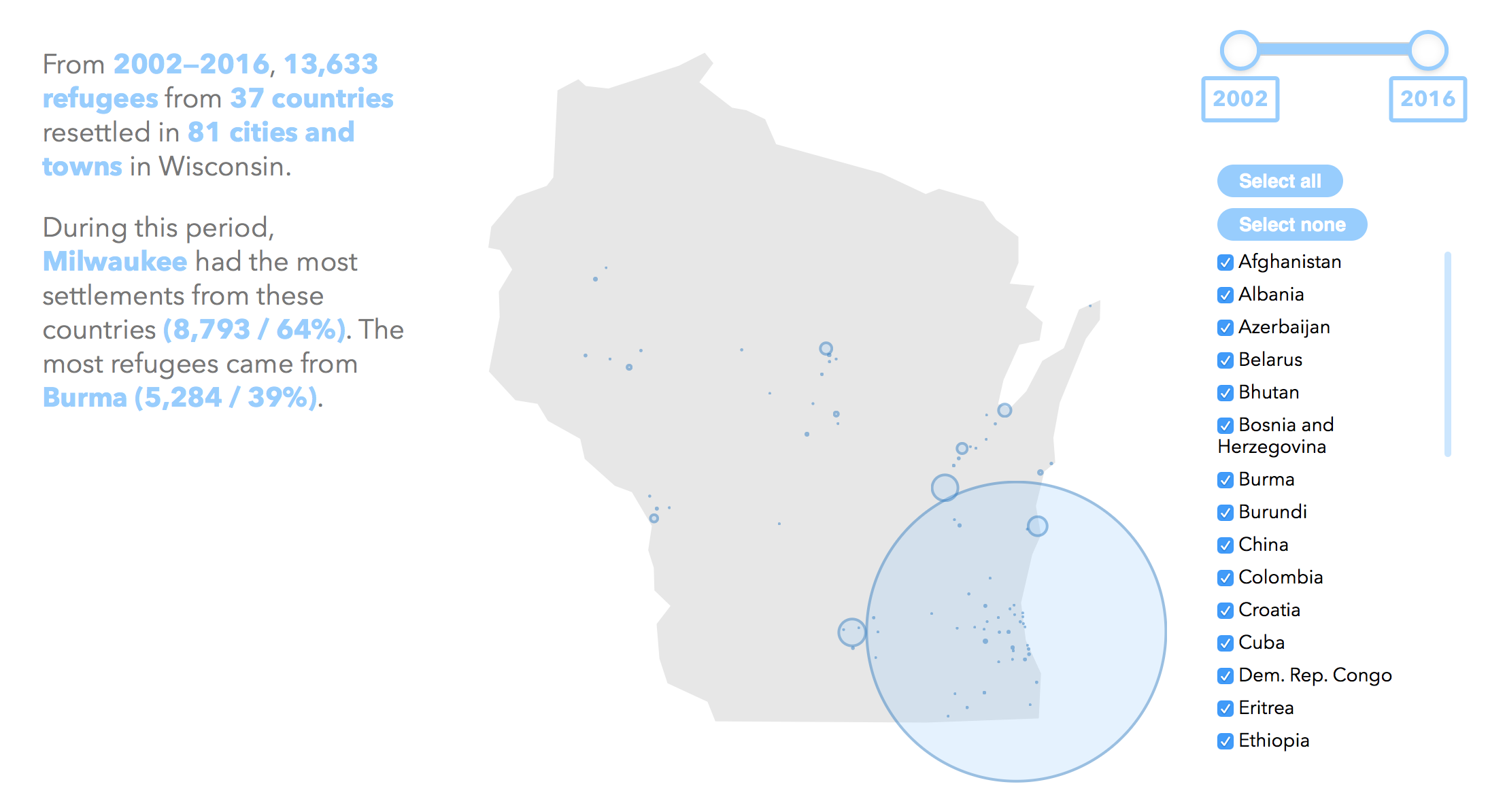 The main impetus for making this project was the recent executive order banning visitors to the US from Iraq, Syria, Sudan, Iran, Somalia, Libya and Yemen. Besides the fact that this is obviously an unconstitutional discriminatory Muslim ban that he-who-must-be-shamed is trying to pass off as a vaguely legal security order, the thoughts floating around in my head were… are there any people near me who would be affected by this in a very direct way? What is its impact close to home, and is there anything I can do? Before I could figure out the best way to help, I needed more clarity of what reality is near me.

I chose to focus on refugees even though the executive order affects many, many people who are not refugees, partly because I knew there was a small group of Somalian refugees living in Green Bay, so when looking for a direct impact I decided to start there.

Here are some of the interesting things I learned as I built this.

Yes, there are refugees in Wisconsin

I’m not sure I had a clear perception of this going into the project. It’s hard to look back and not have awareness now that I’ve spent so much time with the data, but I certainly didn’t realize that over 13,000 refugees resettled in Wisconsin over the past fourteen years. Even if I had seen someone who had resettled here as a refugee, I didn’t have a conscious realization of “oh, that person is a refugee.” I’m sure others share in my unawareness of what the reality is for refugees in Wisconsin.

Of course, I don’t live in Milwaukee, which is where 64% of refugees live, so the people there may have a much clearer awareness. Which brings me to my next point.

Milwaukee heavily outweighs the rest of the state.

The top five locations for refugees are:

That’s a big jump from first to second. I’d be curious to hear more personal anecdotes from Milwaukee residents about their perceptions.

Local government doesn’t have much say (for now)

History is reflected in the map

One of my favorite filters to look at is the refugees from Laos. Hmong immigrants have been coming to Wisconsin since the 70s (40 years!), and you can see the history of their settlements in the map. They’re much more spread out than the other countries, they’ve had more time to spread their roots in this area.

Compare that to Syrian refugees, the first of which arrived in 2014. Only one Syrian arrived in the state in 2014. I wonder how they must have felt until they were joined by four others the next year, and another 119 in 2016.

2,873 refugees from countries included in the ban (Iraq, Syria, Sudan, Iran, and Somalia)

Two of the countries included in the 7-nation ban (Libya and Yemen) have had no refugees settle in Wisconsin during this time period. The largest group is from Somalia.

I’m not sure yet if this is helpful. But for me at least it makes reality clearer—it helps me see my neighbors more clearly. And I hope it serves as a reminder that these things that seem far away, that seem like maybe they don’t directly impact our state tucked away safely behind the great lake, are making our neighbors afraid. They’re making our neighbors suffer. Neighbors who have been here, in our shared community, for fourteen years.

For more analysis of this data, check out this Wiscontext article.

For more poetic and less statistical thoughts on refugees, read my post from November 2015 (a year when fifteen Somalian refugees settled in Green Bay).