I attended school at Baird Elementary in Green Bay, WI from 1996-2001. I lived a few blocks away and often biked to the adjoining Baird Park in the evenings to play hot lava tag. Recently the school and park were rebuilt because the school was overcrowded and in need of significant repairs. The new versions are strikingly different than the places I remember from 25 years ago. 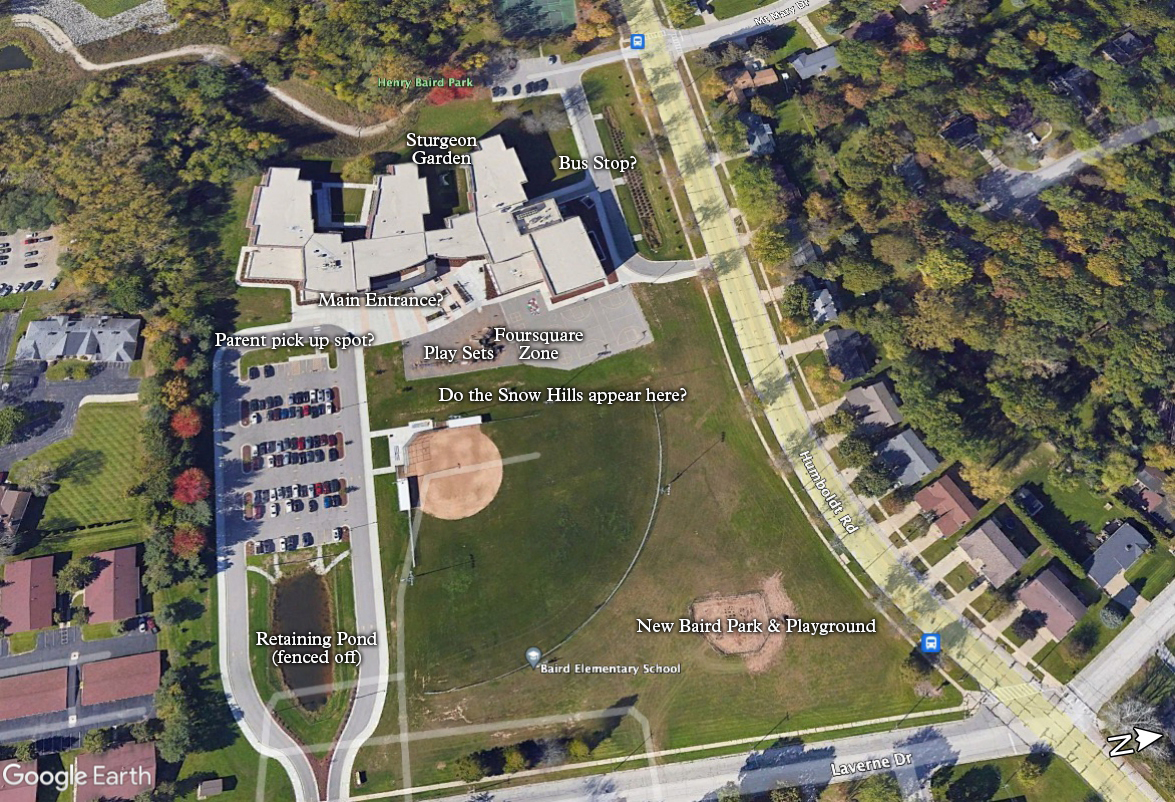 From a local newspaper interview with someone who went to Baird shortly after it was built in the early 1970s, it sounds like their experience of the school was as different from mine as I imagine the new one is. Every 25 years seems to have brought a completely new variation of the school while it’s been a central part of the nearby neighborhoods.

While decisions about changes to the school are made by adults, I’m curious about the impressions and experiences of the children who went to the school in each of these distinct variations. Looking back on what Baird was like 25 years ago, I can see it was rather… quirky.

I was surprised when reading this description of what the school was like when it was first built: “The school on the city’s northeast side opened in 1969 as an open-concept building, in which students learned and functioned together in one big area instead of in separate classrooms.” This “open concept” school is the complete opposite of the winged school with small classrooms I experienced. It sounds quirky in a different way, a kind of one room schoolhouse at a large scale. I haven’t found any news articles about renovations and the decision making that went into creating the winged version I enjoyed, but I’m curious to know who designed the wings and what their interests were in transforming the school so drastically.

Of course, the playground is as important as the classrooms in an elementary school. There were two play sets outside the school—one with a red slide and one with a yellow slide—along with basketball hoops and painted areas for playing foursquare and other games. These play sets were fine, but most kids preferred the vast open field we were able to run around in. When the snow fell, which was most of the school year, the play sets were largely abandoned. The snow plows would push snow off of the pavement and onto the field edge in mounds. This was a magical place for children. The piles were easily two to three times our height, full of interesting (and icy) paths to run through. Snowball fights were prohibited, but happened anyway of course, although kids had their own unspoken agreement that anyone putting ice chunks into a snowball was immediately turned in to the teachers. Admittedly these icy hills were potentially dangerous but we were padded with layers of snow pants and blessed with Child Invulnerability, and they were completely captivating. While I preferred the Snowy Hills, other kids would roll massive snowballs across the field. By March the field was dotted with them like rolls of hay in a farm field, and they took months to thaw in the spring.

Hidden behind a line of trees at the edge of the field was another playground, Baird Park, although we weren’t allowed to go there during recess because it was a public park managed by the city rather than the school district. After school, however, Baird Park and the school fields transformed into one whole. Baird Park featured a large slide mounted on a tall hill. The slide itself was a covered tube, and had an infamous bump in the middle. The goal was usually to hit the bump as fast as you could so you flew off of it, or to slow down and sit in the middle for a while and block the passage for the next kid, who would simply slide down and kick you out of the way. The rest of the playground equipment flowed together through bridges, monkey bars, and gaps just wide enough to jump. It was an ideal place for hot lava tag. The park was shaded by big, old trees and seemed to transition seamlessly into the nearby Baird Creek woodland.

Finally, there was a half hidden garden toward the side of the school, visible from the library windows. It was shaded and protected from the street noise by trees and shrubs, and in the center was a statue of a great sturgeon that was rumored to hold a time capsule. The sturgeon was large enough to be its own playground, and was a favorite place to hang out and climb after school.

I’m not sure what the experience at Baird is like for the current generation of kids who are enjoying newly built rooms and hallways. They kept the sturgeon statue and relocated it, although Baird Park as I knew it is gone. The new school itself is very large, multiple stories with huge windows. From an aerial view, the building seems to have retained some sense of the “wings” of the school at a larger scale and with more regular rectangular shapes. To my adult eyes, it looks nice and has the shine of newness, but I’m not sure what it might be like for a six year old. I didn’t have to climb stairs to get to my classroom every day, and the building was only about 6 times my height rather than 20+. I do feel a bit sad seeing the “new” Baird Park. It was moved to where the school used to sit, and it appears to be very exposed to the sun and the street. There are no trees around it, and the play sets look impersonal and hastily placed. It doesn’t appear to have the same charm as the playground I remember, but maybe to the new kids in the neighborhood it feels like home.

Pattern language for Baird Elementary School as I remember it